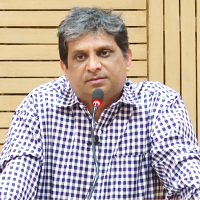 Kundan Singh, is a faculty at Sofia University, Palo Alto and Vice President of the Cultural Integration Fellowship, San Francisco. He has authored a book titled The Evolution of Integral Yoga: Sri Aurobindo, Sri Ramakrishna, and Swami Vivekananda and several book chapters in edited works such as “Beyond Mind: The Future of Psychology as Science,” “Beyond Postmodernism: Towards a Future Psychology,” “Relativism, Self-Referentiality, and Beyond Mind,” “Relativism and its Relevance for Psychology,” and “Beyond Postmodernism: Towards a Future Psychology.” He has lectured extensively in San Francisco Bay Area and has made several paper presentations at conferences in the United States and India. Some of the recent ones are “Colonialism and the Aryan Invasion/Migration Theory,” “Sri Aurobindo’s Invalidation of the Aryan Invasion Theory and the Contemporary Western Archeological Evidence,” “Decolonizing the Indian Mind for the Study of Dharma,” and “Addressing Postcolonial Studies from the Perspective of Integral Studies.” In the last couple of years, he has also taken two five-day workshops in a university in India titled “Philosophy of Science and Indian Cosmology” and “Decolonizing the Indian Mind for India’s Revival as Envisioned by Sri Aurobindo.

Title: This book is an expose of McGraw Hill’s history textbooks for school-going children in California containing Hinduphobic material, set into motion during the British colonial period. The textbooks describe Hinduism as an oppressive religion, framing it primarily in the context of caste oppression and caste hierarchy and distort the epics Ramayana and Mahabharata to prove the point. They promote Buddhism as an improvement upon Hinduism and attribute the greatness of the Mauryan civilization to Buddhist beliefs. The textbooks are guilty of not incorporating the last five decades of research on the Harappan civilization, which otherwise would have shifted the epicentre of the civilization to both the Sarasvati and Indus river systems and linked modern Hinduism with the Harappans. Instead, they describe the migration of Aryans masquerading the earlier discredited theory of Aryans as a race and the Aryan invasion. Though written in the backdrop of textbook adoption process in the California school system, the material discussed is representative and characteristic of slandering and inaccurate materials taught on India and Hinduism all over the world. The analysis involves evidence and critical thought.